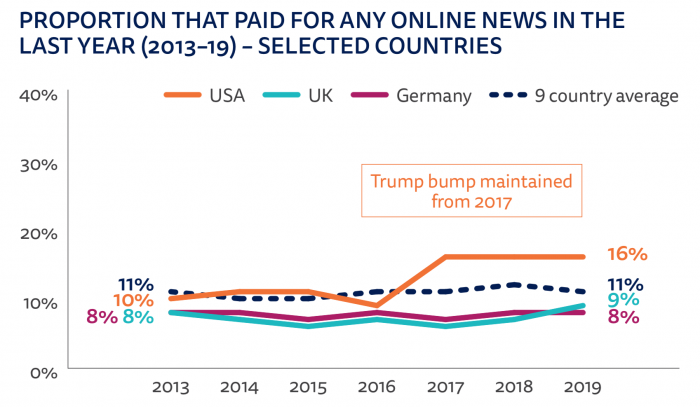 More people say they avoid the news now than did in 2016, with a particularly large increase in news avoidance in the UK. These are some of the findings from a big new report out Tuesday evening from Oxford's Reuters Institute for the Study of Journalism. The Reuters Institute's Digital News Report for 2019 surveyed more than 75,000 people in 38 countries about their digital news consumption. As publishers worldwide put up paywalls and start requiring payment for their content - about 50 percent of respondents in the U.S, Denmark, Australia, and the Netherlands say they bump into one or more paywalls each week when reading news; that figure is 70 percent in Norway - "We find only a small increase in the numbers paying for any online news - whether by subscription, membership, or donation," the researchers write. Members of news and politics groups on Facebook and WhatsApp are also more likely to say that "Trust news in social media most of the time." News avoidance is growing - especially in the UK. Thirty-two percent of respondents said they often or sometimes actively avoid the news, up from 29% in 2017. There's been a particularly large increase in news avoidance in the UK, where "News avoidance has grown 11 percentage points mainly due to frustration over the intractable and polarizing nature of Brexit." 18- to 24-year-olds are quite a bit more likely to say that their first contact with news in the morning comes on a smartphone - and when they pick up their phones for news, they are a lot more likely to go to social media than to a publisher's app. Read more